I’ve been thinking about monsters lately, so I decided to get them out of my brain by making some monster portraits of my new compatriots over at Jelly Helm Studio. I admit, I wasn’t sure how these would be received. When a child draws garish representations of their family members a mother can’t do anything but reply “Oh, honey, these are wonderful!” But when a grown woman likens her workmates to monsters, well…

Luckily the response from Jelly, Mark and NJ was delight and guttural exclamations (also of delight, I assume), after which we hung the family of frames outside the studio door. Why yes, we have a security system on premises: four fake monsters.

After debuting the quartet I asked their human counterparts for a first impression interview which are transcribed below, and are 90% accurate to what was recorded on my iPhone during the interviews. 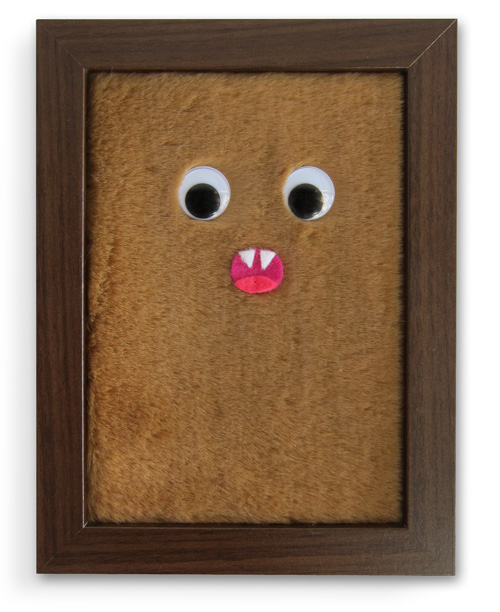 Last night fifty competitors raced in the Stumptown 40 pinewood derby car competition, and me and my pioneer rabbit were right in the thick of it.

It was a night of competition, camaraderie and old fashioned fun. Seeing the different car designs, from a classic racer to a gumby-shaped car, was a spectacular study in homegrown aesthetics. My friends Laura and Scott made cars that looked like a pantone swatchbook and a wedge of cheese, respectively.

I gave my car the moniker Danish Dynamite, from the chant “We are red, we are white, we are Danish dynamite!”. My sister and I were the only two people at Spirit of 77 who knew the chant, so it was a small cheering section indeed. My entry fared well initially, but was finally ousted in the consolation bracket by a car shaped like a bottle of ketchup. Ahh, well, you can’t beat the condiments.

See all of my pioneer rabbit’s adventures: yes, please

See my outfit that day: why not!

A month or so ago my friend Melissa told me she was entering a pinewood derby car race with AIGA. It sounded like a lot of fun, so I signed up too. Organized by Dave Selden and Ryan Parr, the event is called Stumptown 40 and is the creative person’s chance for glory in the cub scout arena. Selecting my driver for the race was a no brainer: my pioneer rabbit…seen here posing next to his custom rims in his first glossy headshot promo.

Last month I posted about making some raindrops out of DEX/Yellow Pages for a paper show called Portland Paper City. The show was recently dismantled, so I gave my raindrops a second home hanging above my studio desk. I might be tempting the weather gods, but I wasn’t going to throw 6 gluesticks worth of work into the round file. Here are a few shots of the 7 large raindrops in a cluster.

In addition to some paper ponies, I also submitted some recycled raindrops to the community contribution show Portland Paper City. What possessed me to spend hours with a gluestick (well, six gluesticks) and a DEX/YellowPages, I do not know. But the result was nine 3D raindrops that float on a wall.

Recently I submitted some 3D paper ponies to Portland Paper City, a collaborative art show. All around Portland there are old hitching rings in the sidewalks from days gone by. Tied to some of the hitching rings are toy horses and ponies, thanks to The Horse Project. Whenever I see them they make me smile, so when I was asked to contribute something “Portland” to the show it didn’t take me long to decide on these little curbside ponies. It didn’t hurt that between ages 6 and 16 I spent 98% of my waking hours drawing horses, thinking about horses, and riding horses. Yep, I’m a horse girl.

Being a horse girl, you can bet that I researched this thoroughly. There is a great Flickr set called “All The Tiny Horses” from which I picked my charges. I hope to draw some more of the horses later, because frankly, I spent wayyyyy too many hours as a child developing my equine drawing skills to let it go to waste. Yes, and after that I’ll re-read all of Walter Farley’s books!

The process of putting my pony drawings into 3D was a challenge. After some prototypes and a short stint of being sidetracked by origami, I decided to put the ponies on display using an open-air type diorama with a built in stand. Below are the dioramas without the stand. 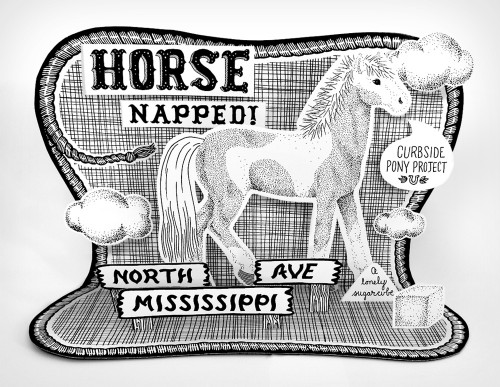 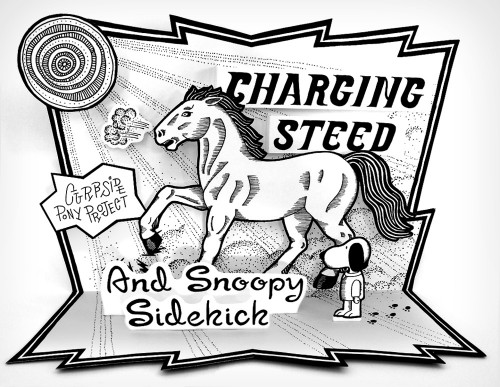 Here is a shot of Charging Steed mounted to the wall at the show. 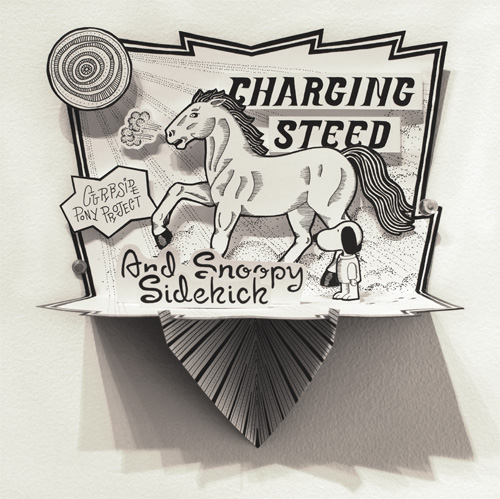 Wow, wow, wow. Check out these book sculptures by artist Brian Dettmer.
My Modern Met writes:
Using knives, tweezers and surgical tools, Brian Dettmer carves one page at a time. Nothing inside the out-of-date encyclopedias, medical journals, illustration books, or dictionaries is relocated or implanted, only removed. Dettmer manipulates the pages and spines to form the shape of his sculptures. He also folds, bends, rolls, and stacks multiple books to create completely original sculptural forms.

There is an interview with the artist here, or see more images of his amazing work after the jump. END_OF_DOCUMENT_TOKEN_TO_BE_REPLACED 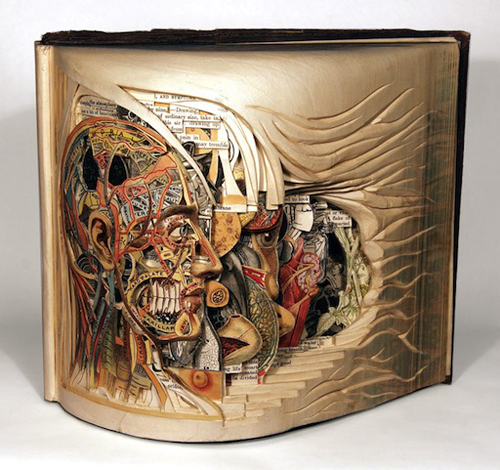 Wow, wow, wow. Check out these book sculptures by artist Brian Dettmer.
My Modern Met writes:
Using knives, tweezers and surgical tools, Brian Dettmer carves one page at a time. Nothing inside the out-of-date encyclopedias, medical journals, illustration books, or dictionaries is relocated or implanted, only removed. Dettmer manipulates the pages and spines to form the shape of his sculptures. He also folds, bends, rolls, and stacks multiple books to create completely original sculptural forms.

There is an interview with the artist here, or see more images of his amazing work after the jump. END_OF_DOCUMENT_TOKEN_TO_BE_REPLACED

Portland Paper City is a collaborative paper craft installation organized by Jessie Bazata, Marisa Green, Sean Garrison and Rory Phillips. The show, which will take place at Disjecta, will represent the city of Portland and feature contributions from the community.

I’ve contributed two pieces to the show, which will open this Saturday, March 5th from 6-9PM, and run through March 26th. Disjecta is located at 8371 N Interstate Ave, and the gallery is open Friday through Sunday 12–5pm. Here is a sneak peek of a curbside pony and recycled rain… 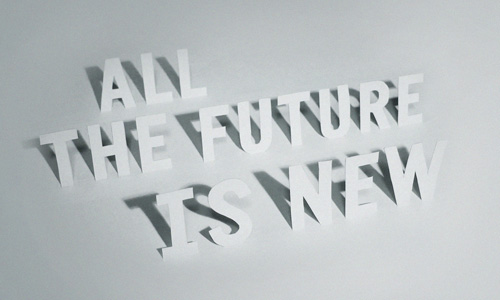 Today is the final day of Free Wallpaper Week at the Bureau. “All The Future Is New” was created from cut letters folded up from their original sheet of paper to make shadows. I hope you’ve enjoyed the freebies and spread the wallpaper cheer across the screens of the internet and eternity.

Download “All The Future Is New” in the following sizes:

Please share these wallpapers following the guidelines of the Creative Commons “Attribution Non-Commercial No Derivatives” license. Basically, you can share the heck out of these, but always remember to attribute the source and please don’t alter or sell the art. Thanks!