Each year I spend a few relaxing advent Sundays making Danish christmas crafts, from clove studded oranges to woven heart decorations. One of my favorites is a 3D Danish Christmas star, also known as a Froebel Star. It is classically done in white, but also available in various colors.

Be warned this activity seems to be a love/hate proposition – either you love it and quickly learn to weave stars with ease, or you hate it and end up with several crumpled piles of paper that look like knock-off Frank Gehry brainstorming models. Disclaimer aside, if you’d like to learn to make one, then proceed…

What you need:
• a bunch of precisely cut strips of paper, in the US termed Moravian star strips (4 strips per star)
• scissors
• 15 minutes +/- your level of craftiness
• nimble fingers and patience of steel

How to do it:
Written instructions would probably rival Anna Karenina in length, so I’ll provide a few visuals. First off, a diagram. For translation services contact Google or email me for a one-on-one tutorial (limited spots available). 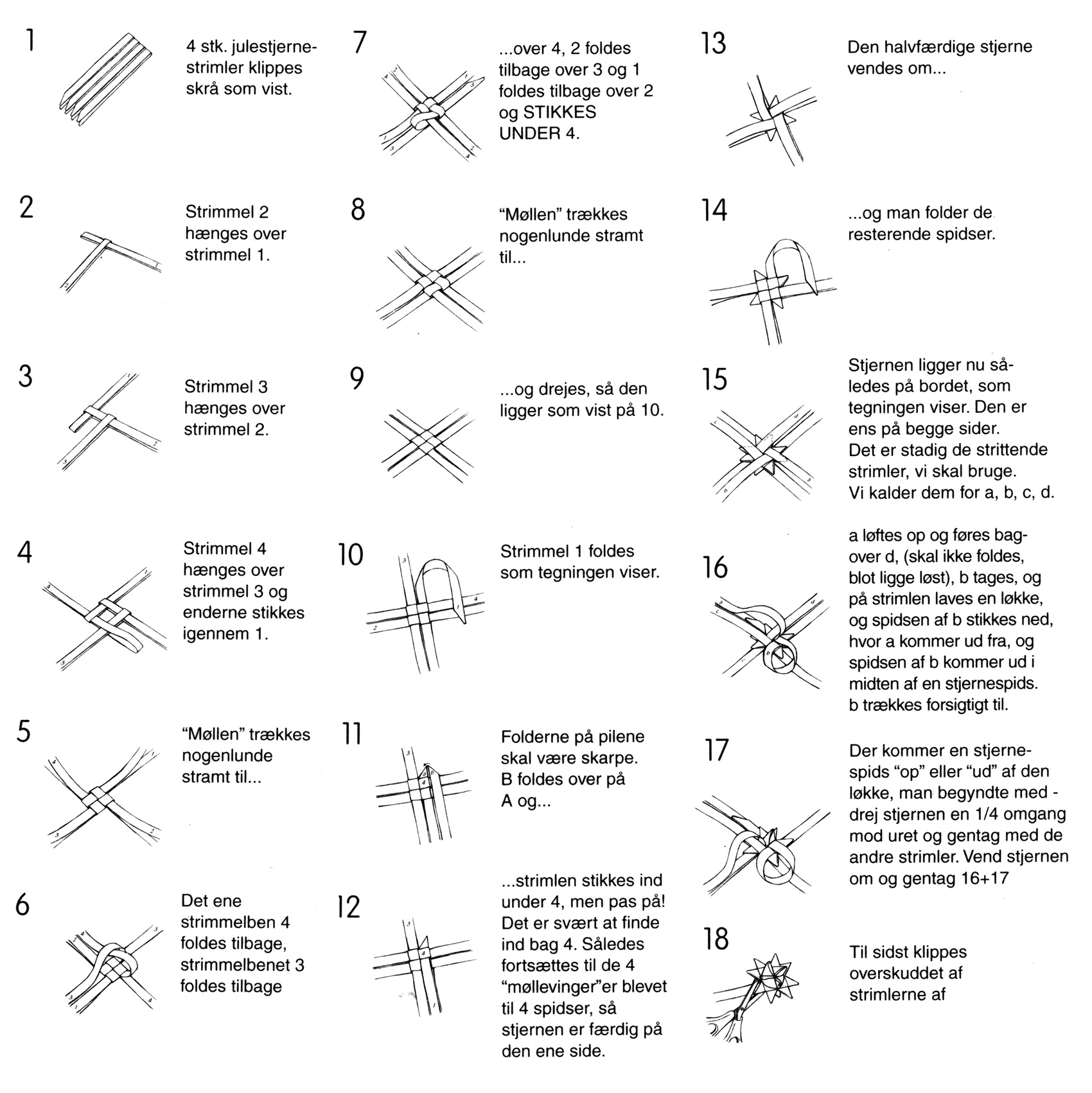 If you need a play by play, my intrepid crafting friend Christa made this video. She can probably outcraft 90% of the population and does so every year with a series of braided paper hearts. If you don’t believe me, JUST YOU TRY to make a star in under 5 minutes.

There are various sizes from 6″ across to less than 1″ (you might need tweezers for that version), but the most common is about 2″ from tip to tip. Perfect for scattering about on any surface that needs some holiday cheer. 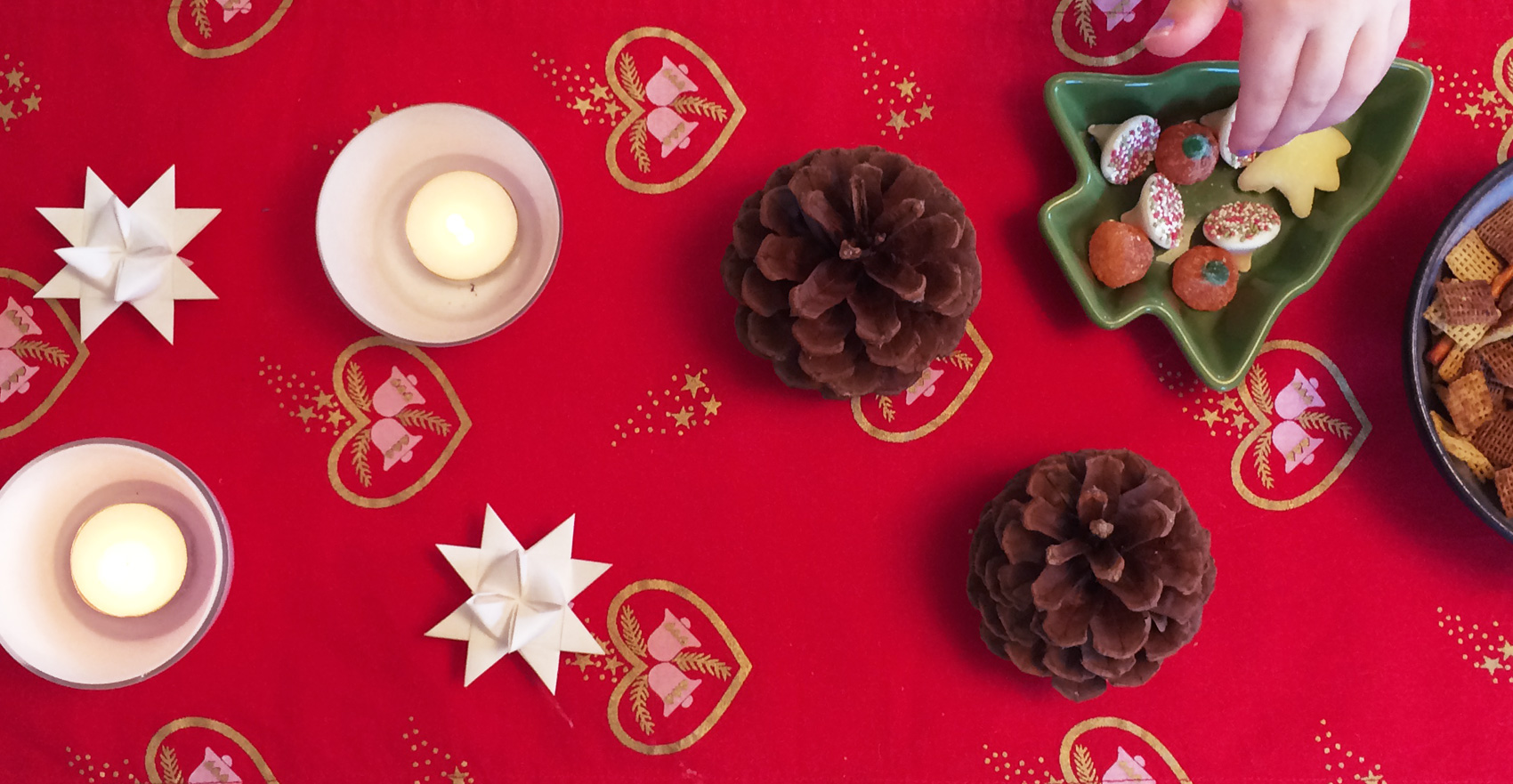 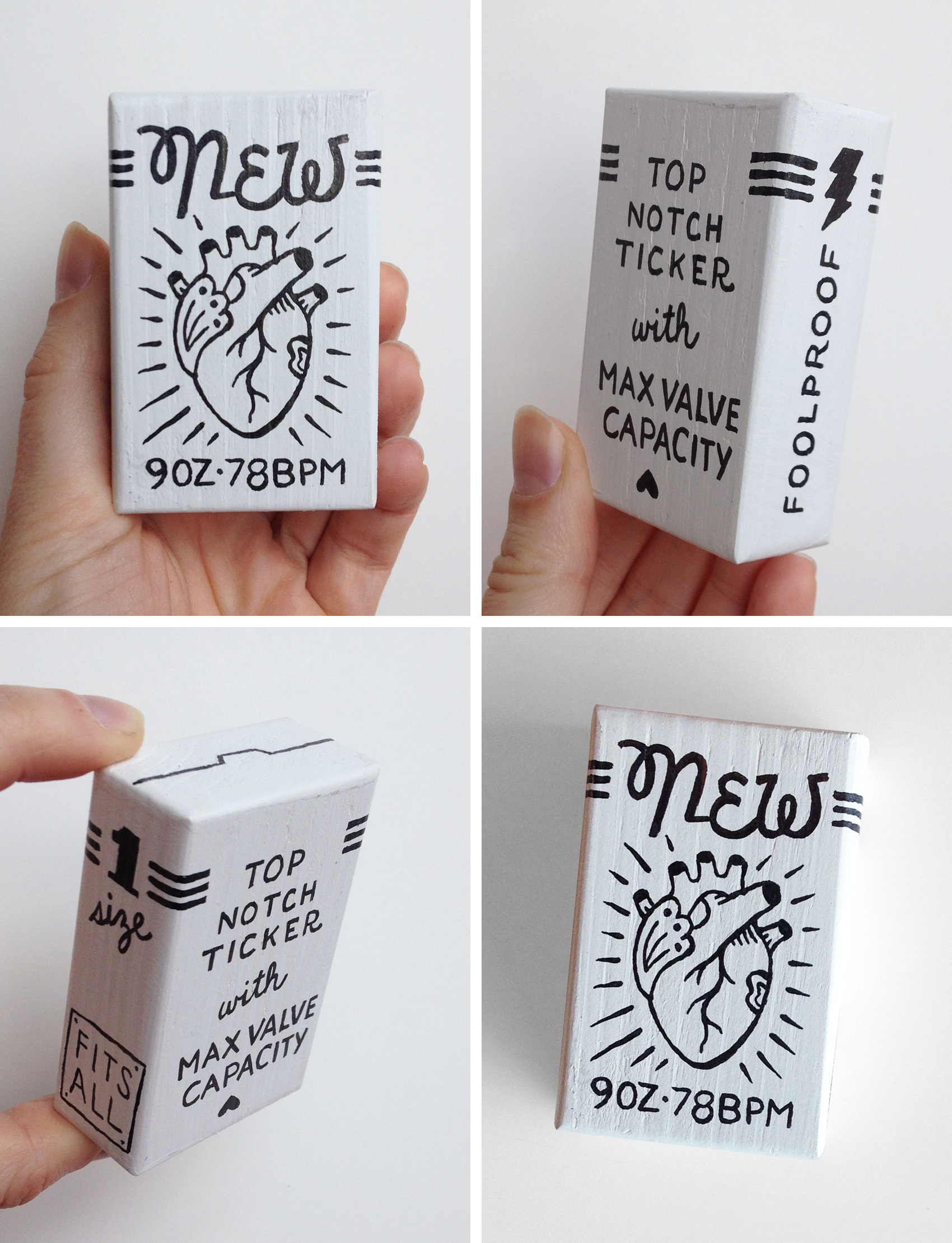 Opening tonight! February 10th, 2017! A visual tribute to The Magnetic Fields! Come see the contributions of 69 artists inspired by the album 69 Love Songs at Portland, Oregon’s Land Gallery from 6-9pm. Here is a preview of my piece in the show for the song “I Think I Need a New Heart”. You can only guess how many of these little boxes I made…

Here are some tests I have been working on for a group art show at Land Gallery happening February 10th titled 69 Love Songs. The show pays tribute to the Magnetic Fields album 69 Love songs with artists each interpreting a song. My song is “I Think I Need a New Heart”, and I’ve been working on tiny heart packaging (think cigarette package size) using painted wooden blocks and 2 colors of liquid paint Markal markers. It’s definitely a medium with limitations, which has been fun to work with. 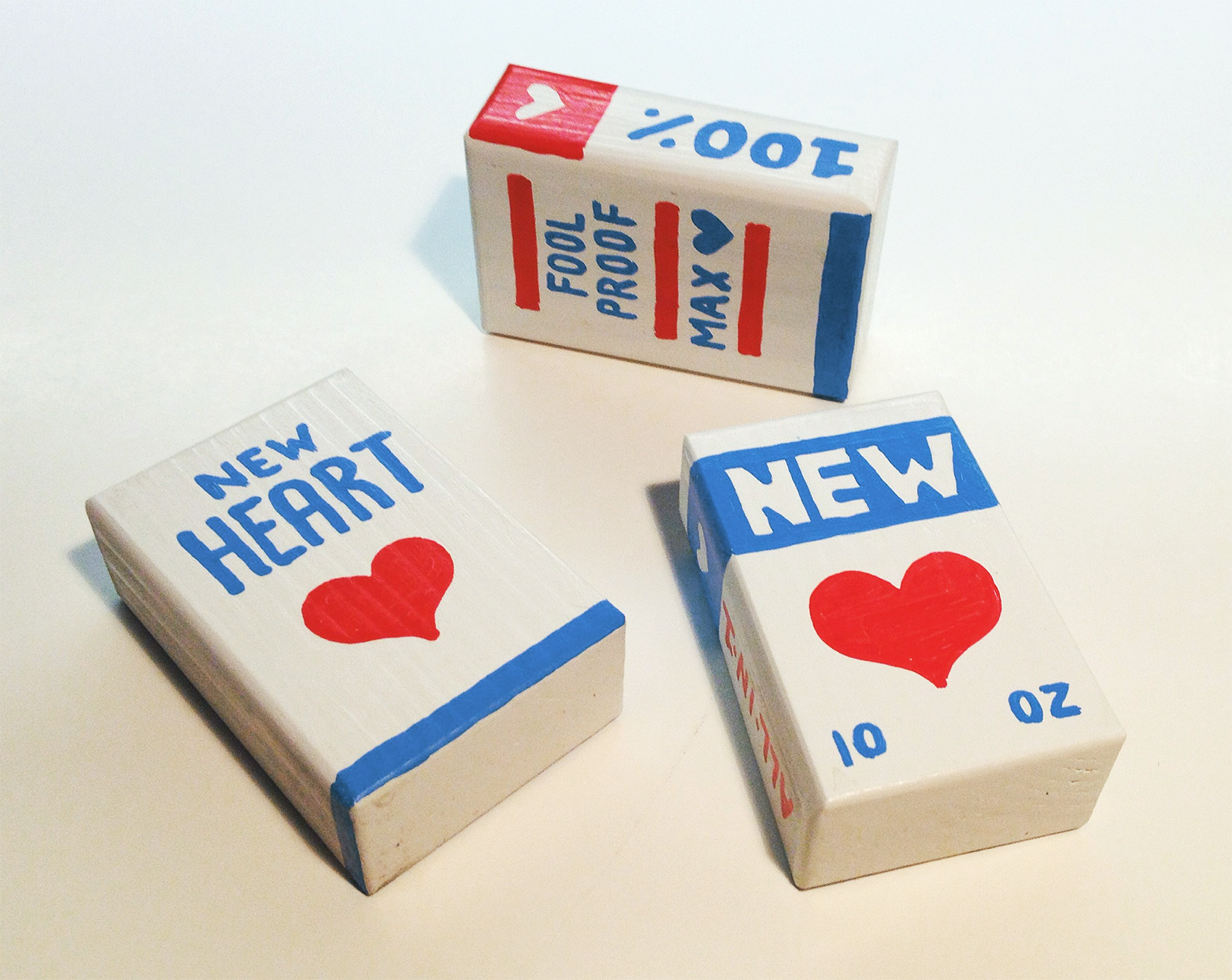 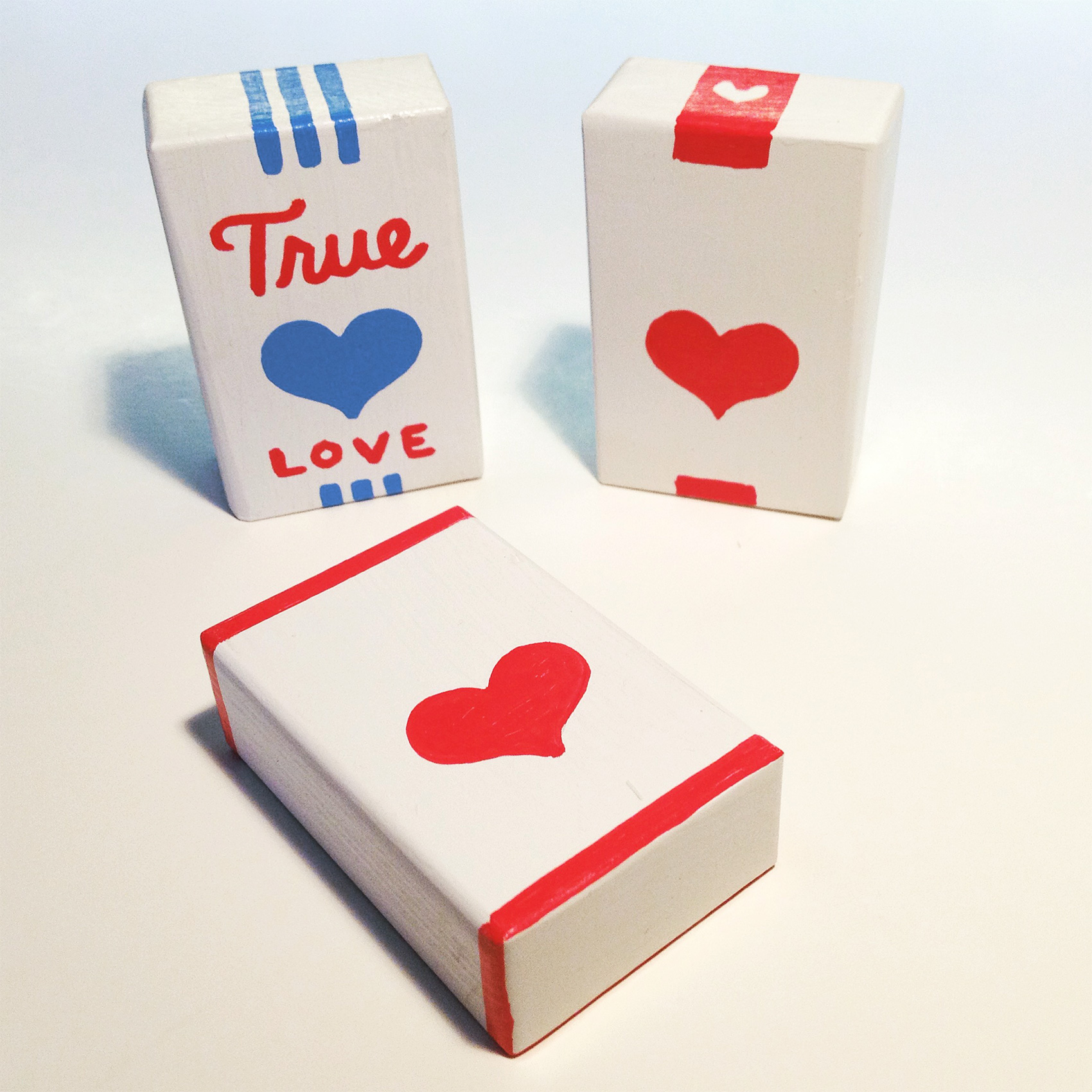 Every once in a while I challenge myself to a handmade project. This time it was a pair of owls based on some earlier drawings and inspired by Sarah Goldschadt’s miniature owls. These owls are the supersize version with the addition of floppy wings that are great for playing peekaboo.

Although I love designing and illustrating, sometimes it’s fun to take time off from the computer in my creative endeavors. This has resulted in many fun things, including concocting lemonade, painting a chinese waving cat, making the one and only Fullitzer Prize, whittling a derby car, crafting seven giant paper raindrops from the Yellow Pages, and creating furry monster portraits of my friends. Nothing and nobody are safe!

So at a recent Creative Night (an evening event where I invite people over to make things), I sewed three sunny side up egg coasters. Any surface they’re placed on automatically becomes an impromptu and unlikely frying pan. I have yet to test them on guests to see who opts for banging their hot cups down with a SPLAT and who chooses to gingerly place their beverages on the delicate yolks with care.

All you need are two layers of white felt cut in various shapes, a yellow or orange circle for the yolk, and some thread (white). First, sew the yolk onto the top white layer, then sew the two white layers together. Ta da!

Recently my design friend Carli and I embarked upon a large side project together – making a lemonade stand for Restaurant Day, an event where anybody can make a pop-up restaurant for a day.

We hand-mixed three exotic flavors, created a booth with bunting and handmade signage, and even made a promotional video for our endeavor. Click here see recipes and photos from our lemonade stand adventure.

Recently my design friend Carli and I embarked upon a large side project together – making a lemonade stand for Restaurant Day, an event where anybody can make a pop-up restaurant for a day.

We hand-mixed three exotic flavors, created a booth with bunting and handmade signage, and even made a promotional video for our endeavor. Click here see recipes and photos from our lemonade stand adventure.

I remember as a child an activity my mother would put before my sister and I when she wanted our full concentration on something – i.e., peace and quiet. Bead artwork, where you place small plastic beads with holes in them on a plastic form, after which you melt them with an iron. The final product was never really worth keeping, but I imagine the hours it kept the two of us occupied were priceless.

So when a friend of mine recently went on a bead buying binge at a craft store, I was gripped by nostalgia and later a slight streak of OCD when I started on some bead artwork again. The process was both frustrating and meditative, but after some warm up I was able to pick up two beads at once to place on the gridded plate.

The first plate I made tested my skills in one-bit typography in spelling Oink, Moo, Juhu. The background became a gradient to create the contrast needed for the type to stand out, and because the bead bags I had were a random blend of colors, so there wasn’t enough of one color to make a solid color background. The second plate used all the beads I didn’t use for the first plate in a much simpler patchwork composition.

The words are much easier to see if you close one eye and slightly blur your vision. I suppose a composition with 1500 beads would have given a crisper image, but I also would have had to put my wrist in traction afterwards.

Each of the little plastic beads is 2.5mm in diameter. That is very very small. So small, that picking up beads with your fingers would be near impossible unless you were a hamster. So out came the tweezers to assemble the 784 beads per plate. The bag of beads cost 10 kroner, so I’d say I got my money’s worth based on hours of entertainment per bag.

While making these I also had plenty of time to invent a new party game. Best played in the wee hours after guests are sufficiently inebriated to think just about anything is amusing, I call it “Sweaty Palms”. The rules are:

1. Take a plate of plastic beads
2. Take your hand and place flat on beads
3. Lift your hand and see how many beads stick to your sweaty palm
4. The player with the most beads (by count or by weight), wins the game!

Finally, a game that gives sweaty people the upper hand.

When Brittany Watson Jepsen of The House that Lars Built asked me to contribute to her 24 days of Christmas blog series about holiday decorations, I took the opportunity to work in a new format I’d been wanting to try – mobiles. My inspiration came from a small felt bird I have placed above my doorway that my mom sewed for me when I was a baby.

For the simplest mobile possible, forget about balancing acts and bars and doing pseudo-math (or even real math). Just hang three things in a row with a string between them – they still spin gracefully and take up much less space than a traditional mobile.

Step 1
The materials you need are cheap and easy to get: thread, a needle, scissors (and an X-acto if you want to be crafty), and thick colored craft paper. 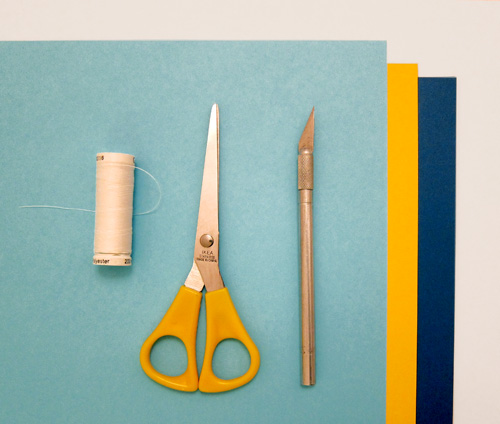