Let me tell you a story. A story of magic and chance and hope and five friendly girls who one afternoon chose to spend a few hours writing messages in a bottle. 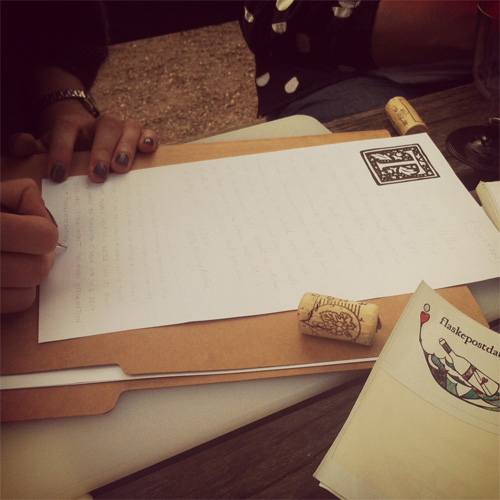 Magic. Last year, a girl wrote a message in a bottle. It was a love letter, she was searching, and it was found. A man in a kayak was out enjoying the fjord when he spied her bottle, a surprise from his usual solitary trips at sea. Unfortunately, he was already spoken for – a married man who could not accept the questions posed in her message. But he wanted to help this girl and promised to send the bottle on its way again the next time he was out on the open waters.

Months went by. The girl forgot about her message in a bottle. One day she received an email from a Danish boy who was wind surfing in Tenerife. He too had found the bottle out on the open water. At first thinking it was a joke, he took a picture of it and asked “are you real?”. A letter written by a Danish girl found by a Danish boy so many miles from home seemed like a stretch. But there was nothing false about it, so they started to write back and forth.

Chance. The boy and girl met, even though he was living in Barcelona and she in Copenhagen. But while the circumstances were exciting, the pressure of fate was too much and reality unfolded in a more mundane way than Hollywood might have written. They lived so far away, they were unsure, they decided to abstain from pursuing further communication after their first meeting. Let down, both returned to their everyday lives.

Hope. Not to be discouraged, she returned the next year with the same group of girls to drink another bottle of wine, pour words onto a page and throw it into the big blue sea. Perhaps the message in a bottle itself won’t find what she is looking for. But the process and the action held significance, and being clear in what you seek is often the first step in finding it.

The flaskepostdating event was organized by Ditte and Lotte, who were inspired to write messages in a bottle after they found one on a beach in Denmark and wondered – what if this message had come from somebody important, meant just for them? Read more about the history and use of messages in a bottle on Wikipedia. The story about the girl and the boy was recounted as one of many past success stories that stemmed from a flaskepostdating event. See you there this coming summer?

“Happy families are all alike; every unhappy family is unhappy in its own way.” So starts the novel Anna Karenina, which was the subject of a poster project I completed a while ago. It was the first time I had worked directly for another creative entity (a local theater company), and I was excited to be working on a topic of literature with a fuzzy deadline entire months away.

After talking about the creative process we decided that we would volley ideas back and forth in various levels of completeness, ranging from very rough sketches to more refined digital comps, until we arrived at a final poster design. The first round of creative went over well, focusing on some main themes from the book.

The art director and I decided the strongest idea was the smoke type (upper left sketch), and that I should explore that further before we chose a final executional style.
END_OF_DOCUMENT_TOKEN_TO_BE_REPLACED

I have a love love relationship with food. I love it, period. Even when I eat too much, I hold no grudges. The ability to eat a lot comes in particularly handy in Danmark, whether it’s at a Julefrokost or just your typical Danish lunch. Because Danes like to eat, and they take it very seriously, as you can see by this poster of different Danish sandwich combinations.

This summer I visited my family in Danmark and checked off a good number of Harald’s suggestions. My Danish sandwich eating habits have drawn strange looks and complaints of fishy smells from my American friends and co-workers, but finally I was in the motherland where I could eat pickled herring with wild abandon and nobody complained about the wafting scent of mackerel.

In case you’d like more insight into eating Danish sandwiches, you can follow my personal guide for a typical Saturday lunch.

And don’t forget you can add a round of cheese on white bread and crackers at the end! By now you should be full, and starting to plan your next meal. Tak for mad!

Microwave mishaps don’t always involve a stack of CD’s, a ball of tinfoil, or a cow stuck in the stairwell. Sometimes they just involve a vintage pyrex dish and some over-ambitious gravy. Hey, it’s Monday and my mind is in a pork-induced haze from my mother force feeding me pork ribs all weekend long.

Not every day can be a fashion hole-in-one; I thought it was OK to tuck my teal sweatpants into my cowboy boots until I was fourteen. Admittedly, middle school was not kind to me. Luckily those days have passed, but traces of my oblivious self still remain, and made a reappearance when I emerged Sunday morning in my special Sunday outfit.

Within 0.3 seconds my husband bleated in dismay. I think his exact words were “No, no, no…no, nooooooo!” He bullied, he cajoled, he pleaded with me to change into something more norm-pleasing. But I was adamant. My beloved puff paint souvenir t-shirt from my 4th grade birthday party was not going to be shoved to the bottom of the drawer. Nobody puts baby in the corner!

Drawing this outfit in pen and ink just wouldn’t do it justice, so I went the extra mile to give you this graphic representation of my technicolor fashion clash.

A while back my friend Jen from Under the Table was promoting an event called “It’s Not You, It’s Me: Stories from the Dark Side of Dating”. She asked some of her food loving friends to contribute their disastrous food-related dates…my submission unfolds as follows in a story from 2001 that I like to call: Turkey: 1, Mormon Boyfriend: 0.

Bringing your new boyfriend home to meet the parents is always a bit stressful…especially when said boyfriend is of the Mormon faith and your parents are of the faith where herpes, safe sex and religion in the Middle East are liberally discussed at dinner (maybe even at breakfast if the coffee is just right). Apart from anticipating the rousing and explicitly vulgar games of charades my family usually plays after dinner, I thought our first meal together would be a fairly stress free affair. END_OF_DOCUMENT_TOKEN_TO_BE_REPLACED