While spending time in Denmark for the holidays I tried to hit up as many art museums as possible while having a 20-month-old in tow and Christmas traditions to uphold. Here is a run down of some of the inspiration and impressions I managed to pack in.

An exhibit on Yayoi Kusama was trippy in many respects – her art, her process, and her personal life. Moving by herself to America in 1957, she obsessively pursued her minimalist and conceptual style focusing on infinity and self-obliteration. Or, in layperson’s terms: DOTS! DOTS EVERYWHERE! In her later years she moved home to live in an asylum so she could focus on her art. So, yeah, dedication…to dots.

A visually oriented and comprehensive source of information on Yayoi Kusama, current exhibits, reviews & articles and much more can be found on Artsy.com. David Zwirner also has curated info on Yayoi and her shows/dates/info here.

A very abstract collection of video work from Joan Jonas titled Light Time Tales required in-depth reading of the exhibit pamphlet (read for yourself), but also had a few gems that required minimal head scratching. My favorite was a projector shining through hung crystals on a video of crystals being moved around.

Even an interview with artist commentary doesn’t provide that much explanation, but maybe that’s what it’s all about.

A combination of a castle with historical content, a modern art museum, and a kid-friendly hands-on museum of industry and transportation, this was a trifecta of learning. Most of the castles in Denmark are more fulfilling in the fairytale way, but there was a lot to see and do here – including an exhibit on religion and faith (read pamphlet for Rainbow in the Dark: On the Joy and Torment of Faith), immigration to Sweden then and now, and going inside a submarine. And this BMW Isetta.

Another small excerpt I enjoyed from the Louisiana trip was a part of a series by Dutch artist Marcel van Eden comprised of charcoal drawings based on historical fact but telling its own narrative, all occurring before his birth in 1965. In an interview he claims his work is “just like life, it makes no sense”. So there you have it!

In the shared creative office space where I work, there is an old freight elevator in the middle of the room. It is surrounded by 30-foot peaked ceilings, raw ceiling beams, a view into an inner-courtyard typical of Copenhagen buildings, and all the stark and minimalistic Danish interior decorating trappings such as black and white lights, decor and social areas.

The elevator isn’t used more than once in a blue moon to haul something heavy up to the top floor – I don’t think anybody really notices it. But when I enter the light-filled room and near the elevator door on the the way to my desk each day I’m presented with this small sign, which for a second causes me pause.

In Danish, it’s nothing special – a “goods elevator”. But in Danglish, a special blend of Danish and English which I use to navigate my multi-culti existence, this is GOD’S ELEVATOR. The full Danglish translation might read:

Gather round all you sinners, all you thieves – I’m starting a new side business selling tickets to heaven. More details to follow once I figure out the logistics. But if I institute a price point that one might expect on such a service, I should be able to retire early. 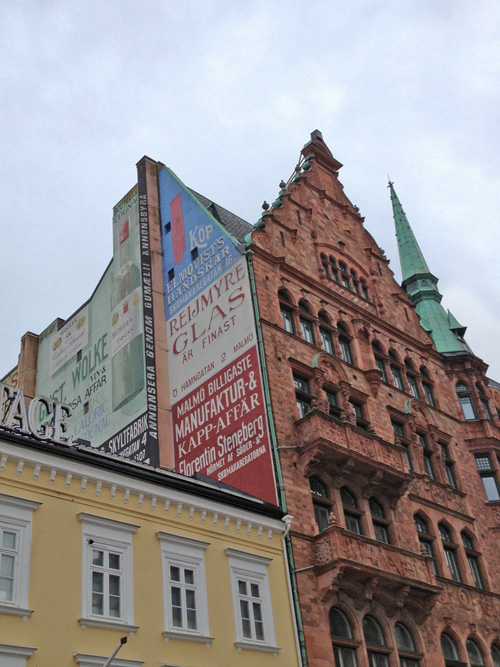 As a break from all the vikings and Danish flags in recent posts, here is some native art from my birth state, Oregon. This WPA-era carving is on the main door to Timberline Lodge on Mt. Hood. The entire Timberline building is a work of craftsmanship – I’ve only ever carved a very blocky gnome figure, so hats off to the artist(s) who carved this. 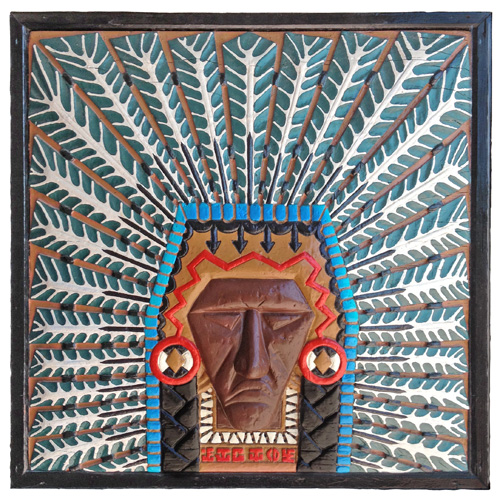 There is a giant plastic bag culture in Denmark stemming from people recycling what they consider the “expensive expenditure” of buying supermarket bags. Bags are used again and again, not only for groceries but to freight clothes and other items from A to B, to cover bicycle seats from the elements, and even as poor-man’s galoshes on a rainy day. I’ve seen a grown and respectable business man arrive to the office with a Netto bag on one foot, and a Rema 1000 bag on the other. His fine leather shoes were spic and span – no shame in bagging your feet.

These bags, and their graphic designs, are ubiquitous, so I thought I would try and distill the various supermarket logos into their simplest but still recognizable form. Can you guess all eight?

After a period of R&R, blogging will now resume at regularly scheduled intervals. For your viewing pleasure, here are various incarnations of the television test card screen, which as Wikipedia notes is “typically broadcast at times when the transmitter is active but no program is being broadcast (often at startup and closedown).” In other words: summer vacation. 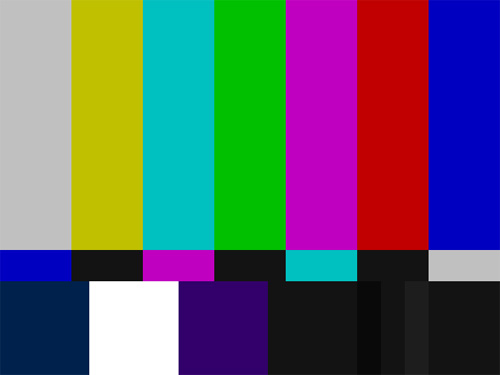 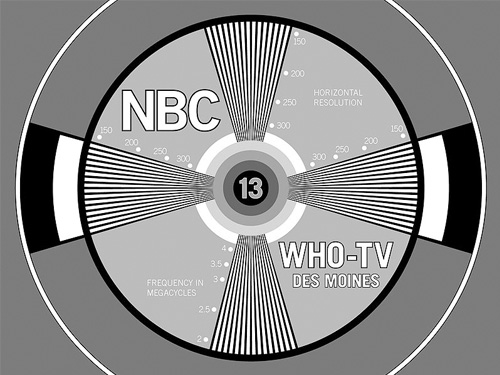 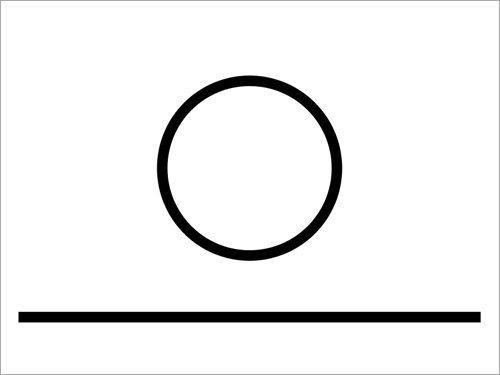 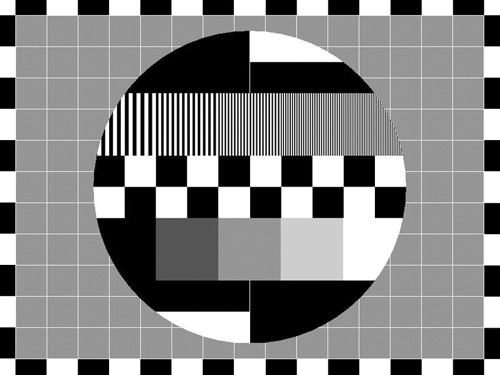 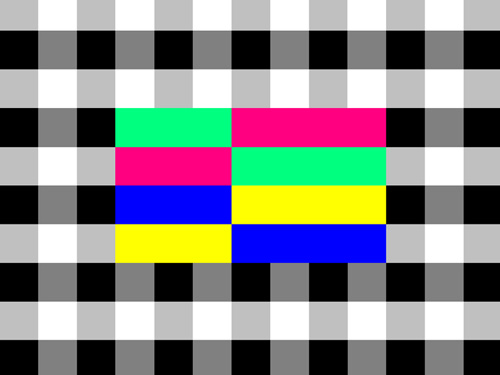 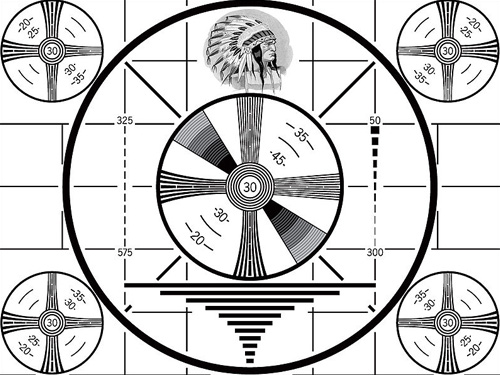 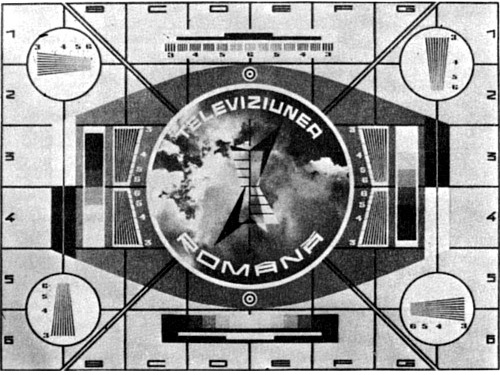 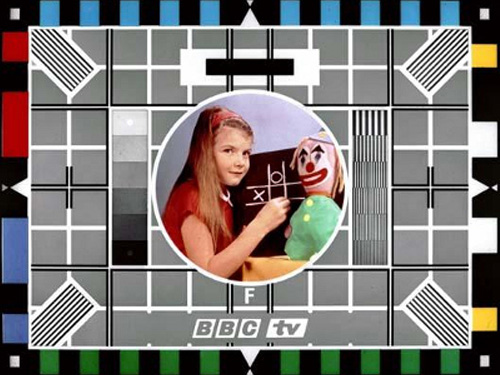 An unknown artist created this tableau, printed on the front of a tiny 3″x4.5″ envelope found in a thrift store in Central Denmark.

It reminds me of one of my favorite card games, Dixit, where players are required to verbally interpret fantastical illustrations. Interpret too literally, and you lose; interpret too abstractly, and you lose. Interpret just right and the result is perhaps a whole new meaning to a unicorn prancing in a field of flowers towards a vine-wrapped tree and fair maiden while a castle and moon look on and jester fairies fly about.

One fun part of Dixit is that it plays off of the players knowledge of each other, and how they interpret things. Sitting in a group of good friends, I might describe this card as “I wish this were my ride to work.”

Here are four things I found while thrifting on Fyn, one of Denmark’s many many islands. The shop I stopped by was sadly closing by the month’s end since some new construction in town had decreased foot traffic. Ah well, captured here for internet eternity…

Going to thrift, antique, second-hand and used-stuff-for sale stores has long been a fascination of mine. Not only are all of wares ridiculously inexpensive (if you know which locales to visit), they all have hidden histories and a varnish that beckons a fantasy-filled story to be told about them. These are my three latest finds, bought for just a few coins.

Thank you spam mail, I do believe this is “for my information”. 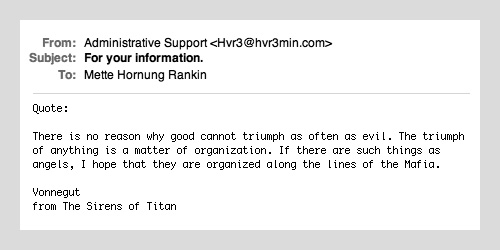