One of the projects I’ve worked on recently for Jelly Helm Studio was to design the studio’s business cards. Several ideas were sketched out (monograms, pop-up castles, and a series of tableaus, among others), but early in the brainstorming process we decided that simple was better. To support this direction, internet research turned up calling cards from way back when.

Most business cards from days of yore included only the person’s name. Additional notations on the card (in the lower corners) were left for specific reasons and were part of the intricate etiquette system surrounding the calling card, which are detailed in The Gentleman’s Guide to the Calling Card. We took the calling card structure and updated for the 21st century. Done and done. 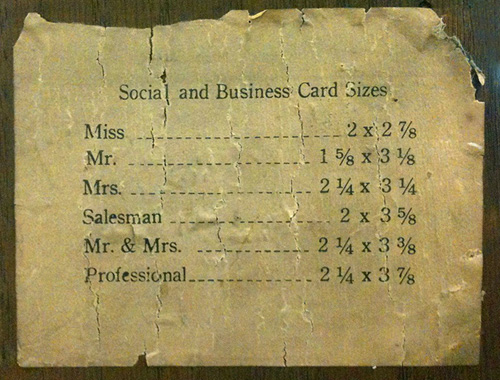 According to this, Jelly Helm’s business card size (1.75″ x 3″) is somewhere between a Miss and a Mister. According to me, it’s just the right size to carry the information on it.

One comment on “Calling Cards for the Digital Era”