The Goodie Monster is here! After a good idea, some sweat equity, and a few technical hurdles my friend Mark and I have brought into this world a new kind of vending machine. It looks a little different, and tastes different too.

Mark came to me with the idea of the Goodie Monster in the summer of 2011 and asked if I would help make it real. The goal: to put good food within people’s reach. The location: the Goldsmith Building where we both work. The details: make it the most awesome vending machine ever. I am a voracious snacker and quite interested in food (as evidenced here, here, here, here and here), so I took about 30 seconds to think about it before committing to one of the bigger side projects I’ve done.

After a failed attempt at getting onto Kickstarter, Mark took the plunge and bought a vending machine out-of-pocket. Yes, you can do that. He also researched what kind of snacks to put inside and put together an informational site that has details about each snack in the vending machine. Did you know that Luna Bars were created for women but can be equally enjoyed by self-confident men?

My end of the deal involved giving the machine a personality, which included buying various materials at Fabric Depot, the largest fabric store in the nation. They must see a lot of strange things come and go, but even the ladies at Fabric Depot raised their eyebrows at my purchases. One check-out person saw my 5 pound box of polyfill and commented “Looks like quite the project you have going there”. You have no idea lady, that’s just for the tail of it!

Once we got started, the Goodie Monster took shape pretty quickly. He didn’t really have a lot to say, but he was very excited about snacking. In fact, all he could utter was NOM NOM NOM and point towards his mouth. Very demanding.

This project was challenging in numerous ways. Mark had never owned or operated a vending machine. I had never sewn 12 yards of fake fur. My sewing machine was from the 1970’s and didn’t like working overtime. Fabric Depot was located in deep Southeast Portland next to some strip clubs. Things could have gone wrong in so many places, but we made it through fairly unscathed. Here are a few pictures showing the process from start to finish, including having our first customers arrive 30 seconds after the Goodie Monster was unveiled. The door wasn’t even closed and they were already clamoring for their Justin’s Nut Butters and Larabars.

To announce the Goodie Monster’s arrival, Mark gave each tenant of the Goldsmith Building a small Kind bar with a booklet introducing their new neighbor. Other businesses in the area got a note in the mail that came in a very hungry envelope. 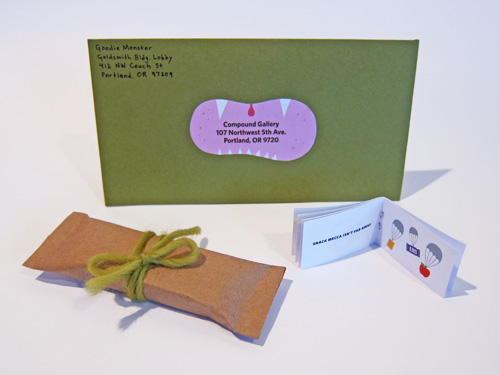 Many people helped us with the Goodie Monster: Darin Richardson who painted and painted and painted, Jen Stevenson who gave us the idea for a GORP recipe card, Jelly who repeatedly yelled WOOHOO and gave constructive feedback, David who owns the Goldsmith and encouraged us to make it happen, and Greg who helped when the Goodie Monster went haywire and started spewing coins and Clif Bars unprompted. To all of you – THANKS!

Update 11.15.2011: The Goodie Monster gets a four course review by local food writer Jen Stevenson of Under the Table with Jen. With almost 40 courses to choose from it was a tough job, but less filling than your regular Thanksgiving dinner. Read more about our snack sampling.

Update 11.23.2011: The Goodie Monster is now on Facebook! Where else is a vending machine clad in green fur supposed to find friends? We hope you like him.

Update 11.25.2011: Steve Law of the Portland Tribune has written a nice article on the Goodie Monster and vending machine policy for the Thanksgiving issue of the newspaper.

Update 11.29.2011: Portland Pulp wrote a nice blurb about our friend called “The Goodie Monster: The Future of Health Food”. Check it out here.

Update 01.02.2012: The Goodie Monster gets a mention in Mix Magazine alongside another vending machine makeover case, the Soda Pagoda.

Update 01.27.2012: Making more Goodie Monsters has been accepted as a project for Kickstarter. Plans must now be formulated – stay tuned!

Update 03.31.2012: Portland Monthly Magazine wrote a short article on the Goodie Monster, saying is a vending machine “with more personality than most, or maybe any.” Why yes, it probably is.

Update 05.01.2012: Silicon Florist blogger Rick Turoczy picks up on the Goodie Monster campaign in the article VendScreen and Goodie Monster: Could Portland be the epicenter of vending machine innovation?