One of the reasons I love working for myself is getting to use most parts of my brain: design, intuition, research, organization, efficiency, critical thinking, non-critical thinking, and chocolate consumption. Which is exactly why I enjoyed this Umpqua Bank project designing an evergreen calendar – there were many interconnected parts that created the end result. The goal was to create a keepsake piece for new employees that reinforced the philosophy of Umpqua, which employees had just learned during their on-boarding training. The format chosen by the client was a desk calendar featuring 12 tenets, and that is where my work started…

An initial round of sketches was created to explore an “evergreen” form factor, ease of usability, creativity, and how it lined up with the per unit production budget. Everything from rotating columns, flippable panels, turnable magnets, reversible cards, and game-inspired counters and pegboards were a part of the first round. 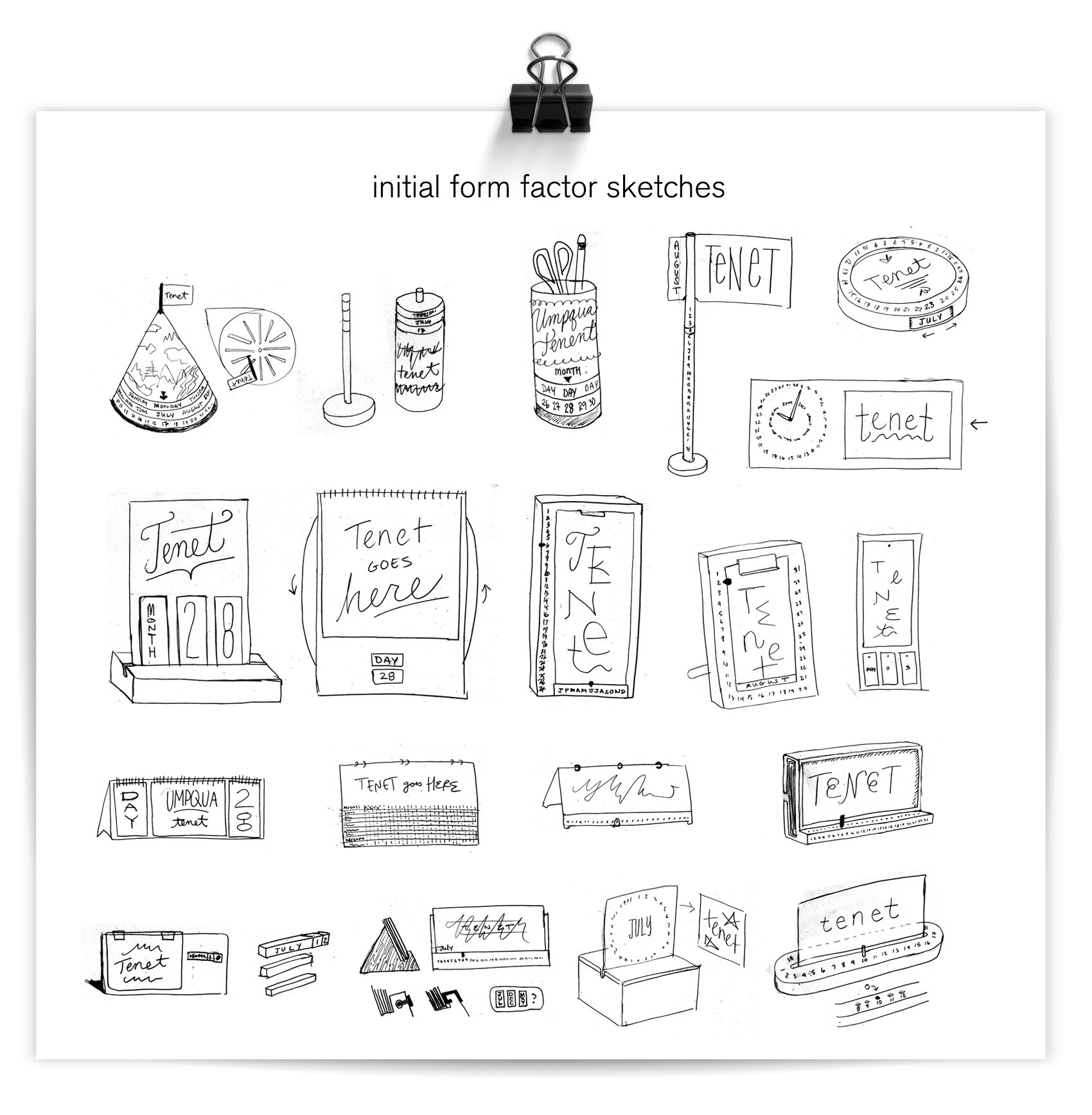 After the sketch presentation, the array was narrowed to three main form factors to price specifically. Umpqua wanted to focus on premium materials so some simpler options were chosen to give more of the budget to materials rather than form complexity. 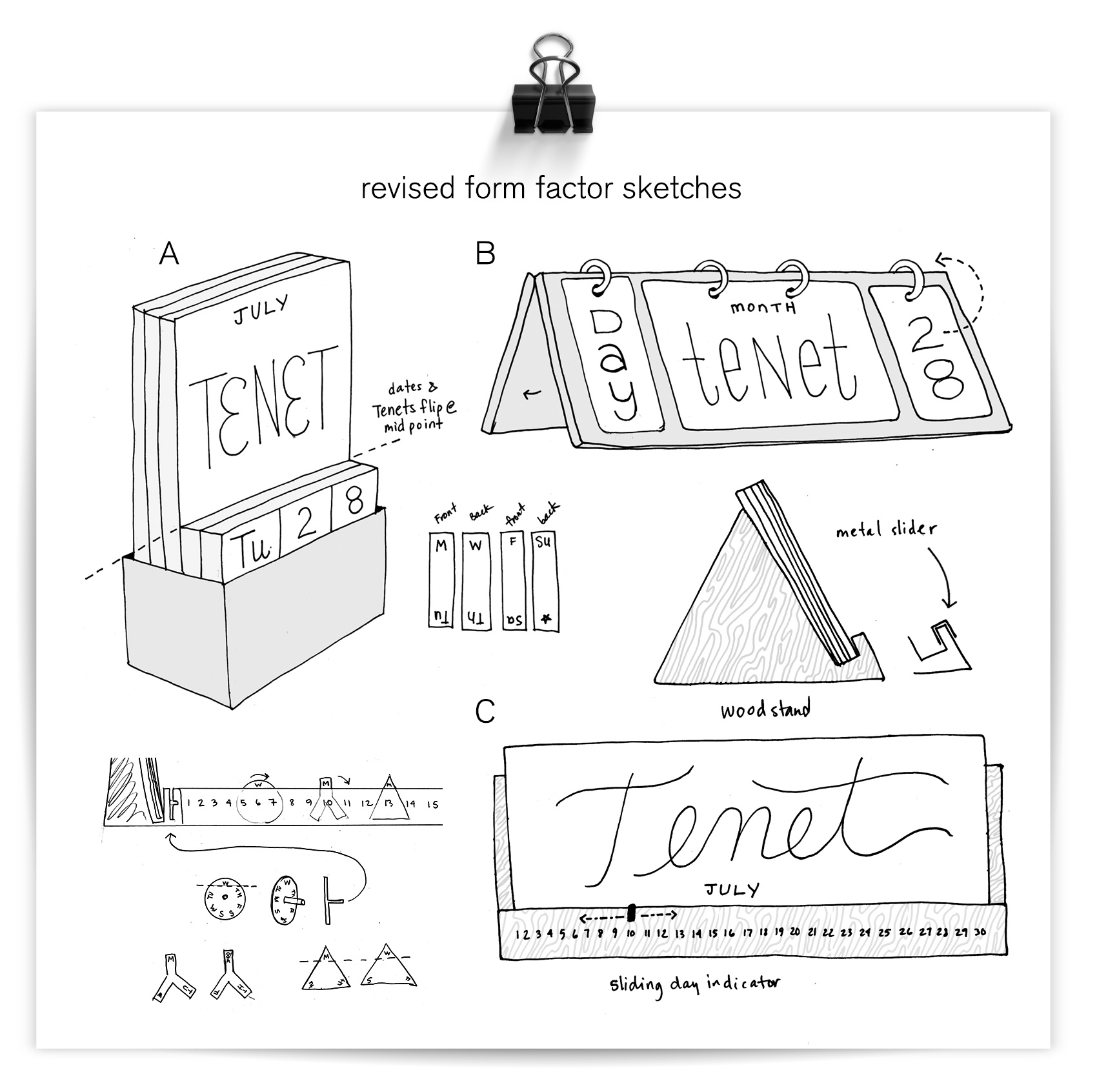 A combination of B and C was chosen to move into the visual design phase, with some modifications to meet the budget. After the form factor was nailed (for now), visual directions were explored to find the right balance of “Umpqua”, banking, fun, and feeling like a custom piece that could hold its own on a desktop. A few focus areas in the initial design process were how much emphasis to put on the date (month, day), how integrated the messaging and illustration should be, what style the illustration should have, and what color impression the calendar should have. The option chosen (C) placed the most focus on the tenet, leaving the dates to be purely functional to highlight the messaging and illustration. 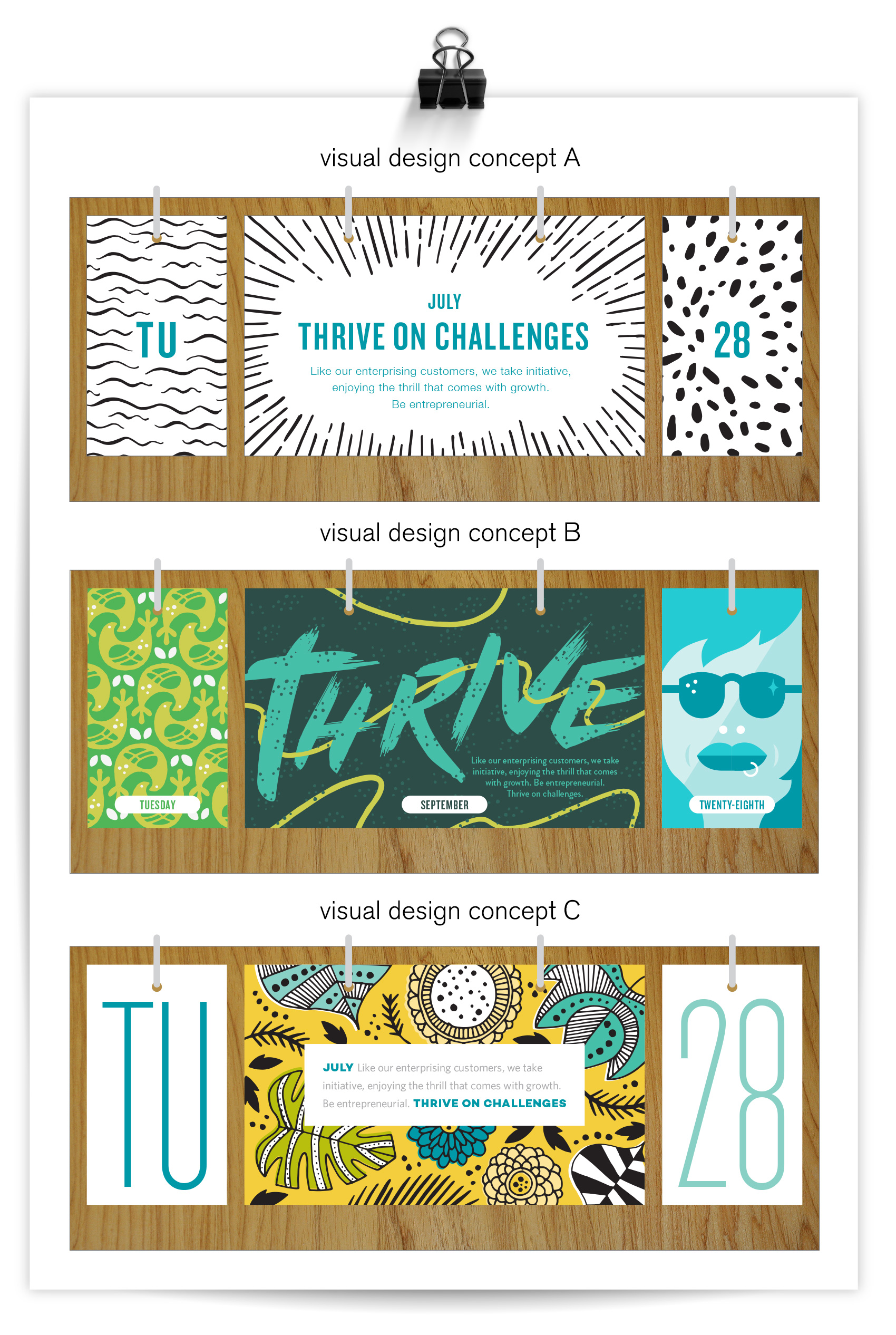 Throughout the production process, the per unit budget was the major factor in determining the final form. The more parts there are to assemble in production, the higher the cost, so a simple solution was needed. In the end a compromise between materials and functionality was reached. A triangular wooden stand with a powder coated lip met the cost requirement, and could hold the tenets and dates in a nice presentation. A bit of functionality was ceded in that the panels have to be manually rotated instead of flipping them on fixed rings from front to back of the stand. Real projects = real budgets. IT BE REAL, FOLKS! 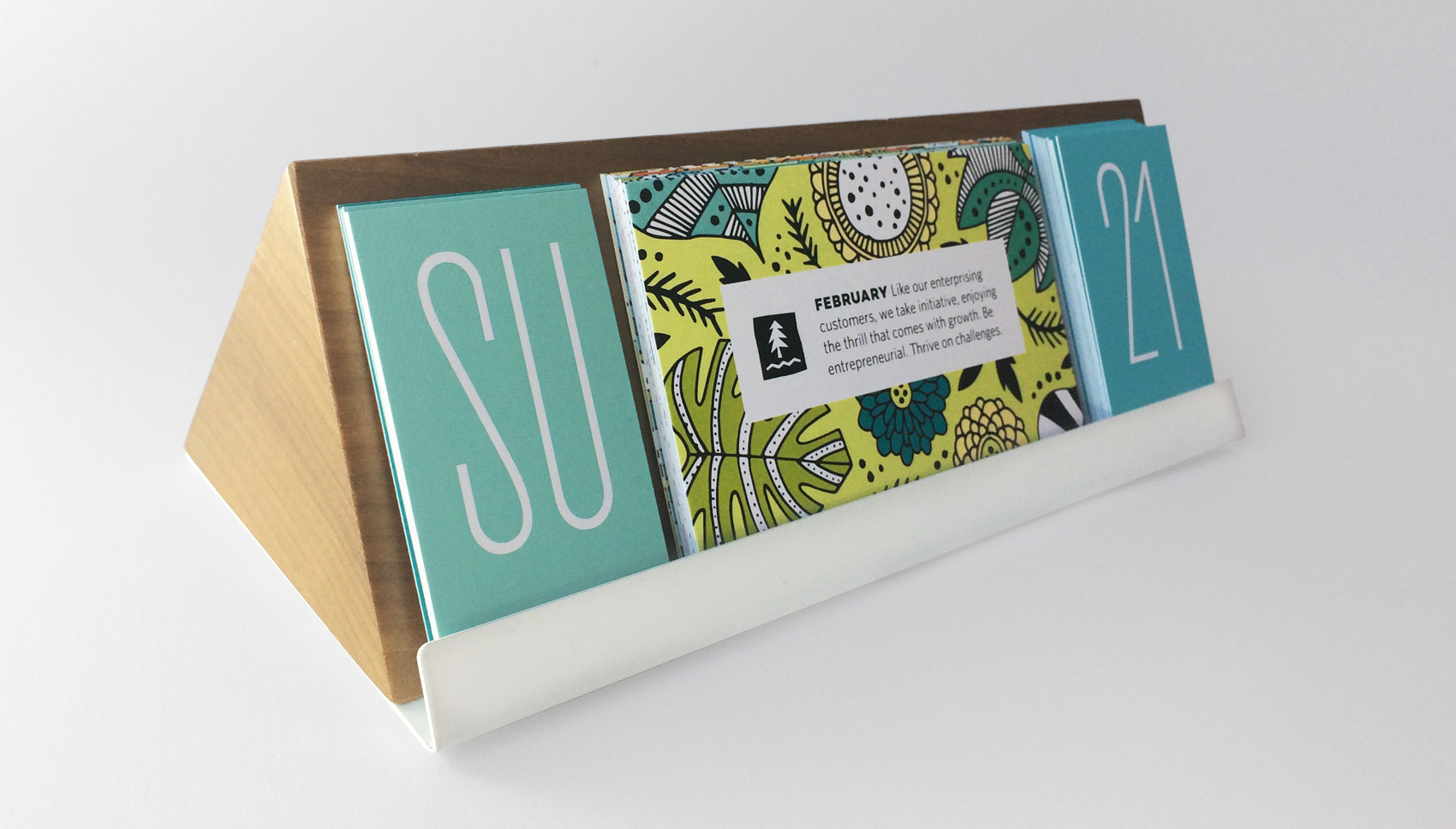 When the term evergreen calendar is used it usually refers to a calendar that can be used for any given year because it isn’t dated specifically. We took the term “evergreen” to the next level so both the information panels AND the form factor were evergreen. Umpqua wanted the option to switch out the panels, so the structure was designed to accommodate rotating messaging without it being a hassle to change out and didn’t create too much waste. An added bonus of the form factor was that it could also serve double duty as a picture rail, note holder, whatever, if users took the tenet and date panels out. 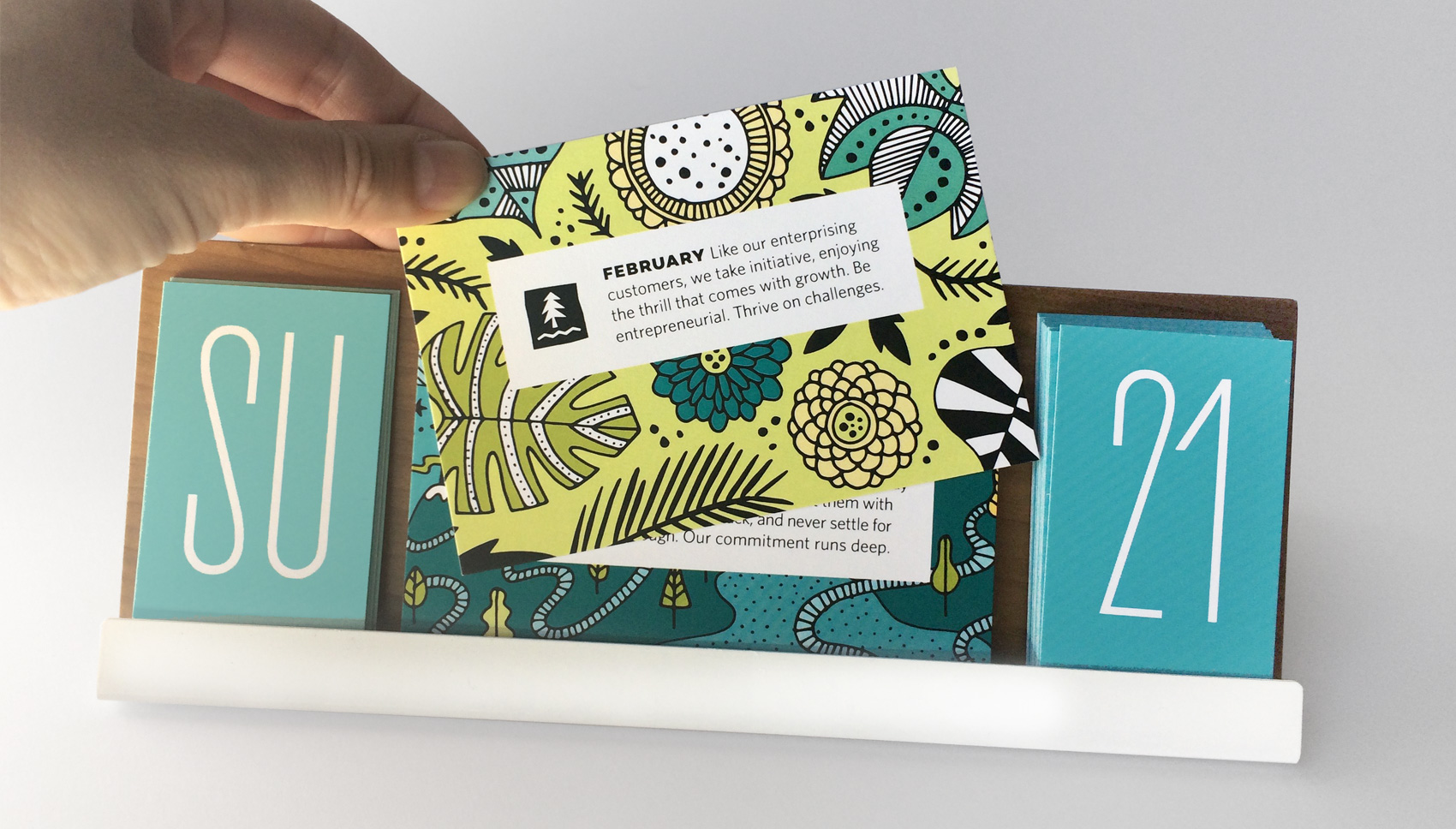